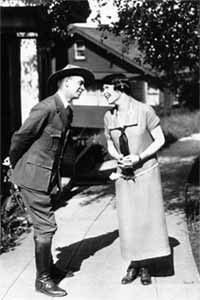 Ansel Franklin Hall was born on the east side of the San Francisco Bay. As a youth, Ansel spent hours, with friends and alone, roaming the wooded hills above his home town of Oakland - activities that helped shape his life-long passion for the outdoors. In a 1909 letter, the excited 14-year-old described his trek to Yosemite National Park in the Sierra Nevada. Ansel managed to get part-time work with the park concessioner when he was still a teenager selling food, gasoline, and other necessities to park visitors. Those experiences were the precursors to a lifetime of service and passion for America's natural treasures.

As a teenager, Ansel received a scholarship to a private high school in San Francisco, then went on to study forestry in the first class to major in the subject at the University of California-Berkeley. He graduated in 1917, then immediately landed his first government job, as a ranger at Sequoia National Park. He served in World War I and returned to serve as a Ranger at Yosemite National Park. By 1923 he was named the first Chief Naturalist of the National Park Service.

With his wife, June, and their six children by his side, Ansel Hall made profound contributions to the exploration, promotion, and preservation of the desert southwest. He dedicated much of his life to the land, wildlife, and native people in the Four Corners of Utah, Colorado, New Mexico, and Arizona both as a National Park Service employee and later as the president and general manager of concessions at another of America's famous landmarks, Mesa Verde National Park.